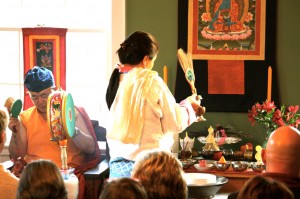 Photos by Richard A. Herman

The Venerable Lama Karma Namgyel of Bhutan recently offered a powerful End-of-the-Year Buddhist blessing to a large gathering in our home “somewhere in Middle Oregon,” as one reviewer once wrote.Â  Before performing the ancient ceremony, Lama Karma created butter sculptures in our kitchen which were then placed on an altar along with offerings of wine, oil, water and Bhutanese incense whose grassy-spice scent filled our living room with “strong medicines.” Â Â  A master throat singer, as Lama Karma’s voice sank into the lowest human registers, our spirits rose higher and higher until the room seemed to have a life of its own.Â  I have heard monks chant these words in Bhutan a number of times, but this time, for the first time, I understood how brilliantly their cadence and rhythms, and the very power of their timbre, all conspire to take the mind to far deeper places than it usually dwells, or can.Â  This blessing was blessed. As always, Lama Karma’s message was about compassion, and the need for compassion in all our endeavors.Â  The butter sculptures, he told us, had absorbedÂ  our collective negativity, and Tom, our dear friend and Lama Karma’s new American brother, Lance Deal, and I were to remove them along with the wine, oil and water, and offer them to the trees in front of our home after the ceremony.Â  “The tree nagas (spirits) purify them.Â  Then the crows will eat them,” Lama Karma explained quietly. The ceremony was a spiritual cleansing of the highest order.Â  “Yes, it was very, very good,” Lama Karma told me privately afterward.Â  “I can tell the people here all meditate and pray a lots;Â  they have very high energies.”Â  May the very high energiesÂ emanating from the photographs above bring you powerful personal clearings as well, and ready you for the holidays and for the coming New Year.Â  Thank you, Lama Karma, Namey Saame cadrinche la (“Thank you beyond the sky and the earth” in Dzonka, Bhutan’s lingua franca.)Â  –Â  Jessica