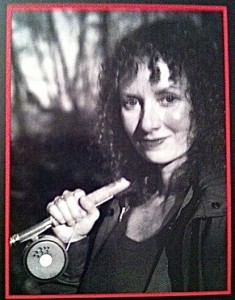 9 March 2014 – The plum trees on our street are suddenly in bloom.Â  Our neighbor’s daffodils beam at us when we take out the trash.Â  The forsythia is out.Â  The tulips are up.Â  Spring is coming and western anglers know fishing season is right around the bend.Â  In honor of the call of the alluvial wild, herewith is an excerpt from my fly fishing book, I Don’t Know Why I Swallowed the Fly (Sasquatch Books), Chapter Ten, “White Wings in the Morning,” when my friend Rande Anderson, our legendary fishing guide Steve Smith, and I end up in the mother of all storms on the Middle Fork of Montana’s famed Flathead River:

On the second day we put in at a place called Cascadilla.Â “We’re going fifteen miles to West Galcier,” Steve announced.Â  “It’s a good long run.”Â Â  We cruised through the first eight miles following our usual rhythm:Â  Steve rowed and I cast at approximately the same speed, which was about half the velocity at which Rande flogged the Rocky Mountain air with her rod.Â  From above I reckoned we looked like a broken Austrian cuckoo clock. Â “I’m gonna tie on Royal Wulffs,” Steve announced.Â  “You know, white wings in the morning.”
“What did you say?” I asked.
“White wings in the morning.Â  The old fly fishing rule:Â  you fish a fly with white wings in low light so you can see it.”
“That’s pure poetry!” I sang.Â  “I told you fly fishermen are romantics,” I told Rande. “Right Steve?”
Steve wasn’t listening.Â  He watching the sky.
“What’s wrong?” Rande asked him.
“Well,” Steve replied slowly.Â  “The clouds are moving west, but the air is blowing east.Â  Whenever you see forces moving against each other, you know you’d better pay attention.”
Half a beat later the strangest wind I’ve ever felt came trumpeting in from the west and spread over the river like that terrible 1950s footage of the Nevada nuclear test blasts.Â  The water’s surface literally crumpled.Â  Steve just kept on rowing.Â  Soon he was rowing with all his might, but we were moving backwards.Â  It had begun to rain bullets.
“Have you ever seen weather this bad?” Rande asked him.
“Once.Â  And not here.”
There is no way to get out of the weather in an open boat.Â  Rande and I scrambled into our rain gear and battened down our hoods, but we were both taking on water fast.Â  Gentleman that he is, Steve procured the best protection for us that he had: a plastic picnic tablecloth in a gay fruit print.
“I feel like Carmen Miranda on the Titanic,” Rande said.
Sinking in style was a definite possibility.Â  Our first big-time white water was fast upon us, a long set of standing waves called Tunnel Rapids, which happen to be the first rapids Meryl Streep ran in The River Wild. At the end of Tunnel Rapids awaits a surprise, a wicked vertical boulder called Can Opener.
“Now, if I say ‘move right’ or ‘move left,’ do it,” Steve commanded.
I had failed to mention that both Rande and I are hopelessly directionally dyslexic.Â  Our minds filled with horrifying images of frenetic scurrying in all the wrong directions followed by watery deaths, our bodies marked only by the idiotic shroud of a floating plastic fruit salad.
Then we were flying.Â  Against all odds, Captain Smith had positioned the boat perfectly.Â  Our rapids debut was rapid indeed.Â  In fact, it was thrilling.Â  Mostly because we made it through.Â  We figured we could handle anything after that. “Next is Bonecrusher!” Steve yelled.
“Bonecrusher?Â  BONEcrusher??Â  B O N E….CRUSHER???!!”
Rande and I sounded like a freaked-out witches’ chorus.Â Â  Then I spied a photographer furiously snapping photos from atop a house-sized boulder above the river.
“Smile, Rande, Smile!”Â  I yelled.Â  “We’re gonna be in the papers!”
“No, he’s our guy,” Steve said.Â  “He shoots every group that goes by here, even in bad weather.”Â Â Â Â Â Â Â Â Â Â Â Â Â Â Â Â Â Â Â Â Â Â Â Â Â Â Â Â Â Â Â Â Â Â Â Â Â Â Â Â Â Â Â Â Â  We blasted through Bonecrusher, but not until we passed a yellow raft flipped over and high-centered on a rock.Â  Steve scanned the territory for casualties and found none.Â Â  His first Boy Scouts merit badge was for rowing and he didn’t fail us now.Â  He kept to the oars, even in that banshee wind and iron-pellet rain and he got us through The Narrows, Screaming Right Hand Turn, Jaws, Pinball, CBT (Could Be Trouble), The Notch, and, finally, Pumphouse.
“A nice little drop,” he assured us, “and it’s the last one.”
I have on my desk a prized photograph of three people in a wooden boat surrounded by leaping white water under a sky the color of death.Â  One is rowing; two are holding hands and clutching the gunnels for dear life.Â  The oarsman is hatless, his scowling fatigue obvious even from a distance.Â  The faces of his two passengers are obscured by hydrocephalic rain hoods.Â  All you can make out are two oddly demented matching grins.Â  There isn’t a fish in sight.Â Â  â€