The Frequency of Love

It began with the Heart Cloud.

There I was, a frantic bride-to-be single-handedly remodeling my fiancÃ©â€™s house while he was riding across the country on his bicycle with my future stepsons on a trip planned long before weâ€™d met. Every few days I also had to drive to my own home to keep it in shape for potential buyers. It should have sold months earlier given its charm and was by then on the cusp of foreclosure thanks to the weapon-of-mass-employment-destruction that 9/11 was to all travel writers. Suddenly, I had had it with God.

â€œHow could you do this to me!?â€ I wailed. â€œI love you! You know I love you! I am a holy CHILD of God and you have no right to treat me this way…!!! Wahhhhhhhhhhhhhghhh!!!â€

What happened next was one for the records, and as such is duly noted in Chapter 31 of Roll Around Heaven. First a wispy little cloud in the sky to my left suddenly took off…when all other clouds were standing still. The little cloud headed west until it lined up precisely with the trajectory of my car then planted itself above me and started moving in a circle, a lively cloud-puppy chasing its tail. Until…it formed a heart. There it stopped, an astounding symbol of love parked in the patch of blue that was in my direct line of aerial vision, a valentine divine.

In his book Power vs. Force, medical doctor and quantum researcher David Hawkins proposes that ours is a world of frequencies. Meaning that everything here has one. On a scale of zero to 1,000, he says, zero represents death, and 1,000 complete enlightenment. Love, he adds, or the idea of it, vibrates at a frequency of 500. Japanâ€™s eminent energy researcher, Dr. Masaru Emoto, teaches us that higher frequency thoughts, represented by their concordant words, quite literally create glorious snowflake-like crystals in frozen water. Write the word â€œwisdomâ€ on a tub of water and freeze it and you get a lovely, boldly structured crystal; you get exactly the same crystal if you write the word for â€œwisdomâ€ in any language, too: itâ€™s the thought that counts. Write â€œlove and gratitudeâ€ on a tub of pure water and freeze it, and you get crystals of such blazing beauty you almost have to shield your eyes from it, like looking at the sun.

As you might expect, water exposed to damning words freezes into an ungodly mess that looks an awful lot like cancer cells.Â  However, this same messed-up water after having a healing prayer said over it, reverts back into glorious crystals. Not only that, Dr. Emoto found that natural water, taken straight from a pure mountain spring, also freezes into magnificent crystals.

The implications of Dr. Emotoâ€™s work are dizzyingly obvious. This handsome old Earth, as it was created, is intrinsically a thing of health and beauty. Words and images, and the thought-forces that drive them, either align with this intended glory…or tear it apart. Really, Emotoâ€™s findingâ€™s are nothing less than powerful proof of the exquisite responsive creativity in which we live. Puts a little more za-zoom into the idea that we are divine co-creators, doesnâ€™t it. Especially when you consider that our very bodies are 98% water.

It also gives credence to the origins of a special delivery sky valentine. The shimmering rapture hidden in the very nature of natural water speaks to a universe anchored in love. Think about it. I cried out my angst to â€œGod,â€ and â€œGodâ€ sent me an aerial I-Love-You. I had not asked for confirmation, I simply declared both my divine devotion, and my acute disappointment that that devotion didnâ€™t seem exactly reciprocated. Really, it was more of a â€œhow dare you!â€ than a blubber.

And the heavenly response was, well, heavenly, and certainly not a â€œhow dare youâ€ back. It was more of a â€œDear child, fret notâ€”you are wholly loved,â€ the message delivered, as they always are, with astounding originality and verve.

The whole thing went far beyond the already out-there experience of writing â€œloveâ€ on a tub and getting loving crystals back. This was a conversation. Or, more precisely, an adolescent meltdown at a seemingly neglectful parent, as it were, who in no uncertain terms reassured the child with evidence absolute that all was rightâ€”very rightâ€”in her world. For me, it was the end of any question about what the Beatles have said all along: Love is all there is.

It was also the end of any lingering spiritual doubt. Thrown to my knees (figuratively…I was still driving) with a breathless humility, I could manage but a vaporous â€œIâ€™m sorry.â€ If a mouse could talk â€“ or maybe a one-celled plankton on the bottom of the sea â€“ it would have spoken in my broken voice that day. But my heart was fixed and blazing. A joy unfettered landed squarely upon my heretofore-heaving chest not unlike the unexpected perfume of wild jasmine issued mysteriously from a lakeside garden passed unseen in the night. A scent so sublime it maketh you to lie down beside still waters and restoreth your sinking soul.

Needless to say, my house sold in two weeks flat. More important, the craft of that wily cloud-heart set mine to beating at the cloudâ€™s own particular fierce frequency, and I have seen hearts everywhere ever since. Hearts in the tarmac. Hearts in squished gum. Hearts in cake batter, and in the crumb. Water-drop hearts. Tea-stain hearts. Under-the-pepper-mill coarse-ground hearts. Hearts in peanut sauce, hearts on the street, hearts in the salsa, hearts in beets….which we call â€œheartbeet.â€ Dozens of them. Scores galore. Hearts in every corridor. So constant are these cordate parades that my bridge-playing friends say â€œyouâ€™ve got hearts in spades!â€

I photograph them all and my collection really is rather stunning. I could no more settle on a favorite than Dr. Emoto could choose a favored crystal. But the toothpaste heart I managed to spill on my best cashmere scarf is pretty cool. So is the one my own blood made on a tissue when I nicked myself shaving my legs…talk about your proverbial bleeding heart.Â  If pressed, I think Iâ€™d have to say that the most remarkable heart of all was the one created by hundreds of baby spiders in our garden last spring. Their welter of tiny nonstop wigglings seemed to vibrate as an entomologically-correct replica of the eternal waltz of the sub-atomic particles that make our world, a creeping version of the dance of the cosmos suspended in a hammock of web.

Here, then, is but a sampler from my heart-earned gallery, un-PhotoShopped and untampered-with, captured just as I found them, a caravan of hope if there ever were one.Â  May they restoreth your soul as well. 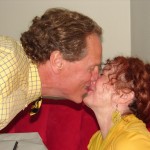